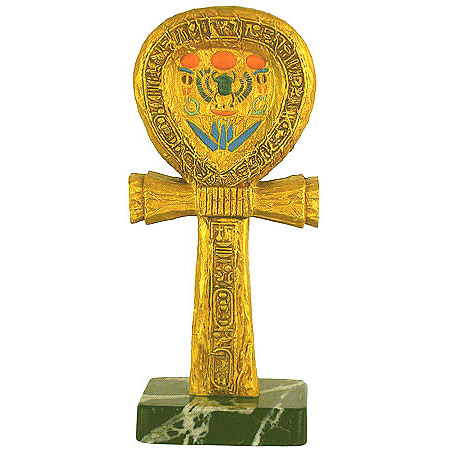 The Ankh is defined as: The symbolic representation of both Physical and Eternal life. It is known as the original cross, which is a powerful symbol that was first created by Africans in Ancient Egypt.

The Ankh is commonly known to mean life in the language of Ancient Kemet, renamed Egypt by the Greeks. It is also a symbol for the power to give and sustain life, the Ankh is typically associated with material things such as water (which was believed by Egyptians to regenerate life), air, sun, as well as with the Gods, who are frequently pictured carrying an Ankh. The Egyptian king is often associated with the Ankh also, either in possession of an Ankh (providing life to his people) or being given an Ankh (or stream of Ankhs) by the Gods. It is usually worn as an amulet to extent the life of living and placed on the mummy to energize the resurrected spirit. The Gods and the Kings are often shown carrying the Ankh to distinguish them from mere mortals. The Ankh symbolized eternal life and bestowed immortality on anyone who possessed it. It is believed that life energy emanating from the Ankh can be absorbed by anyone within a certain proximity. An Ankh serves as an antenna or conduit for the divine power of life that permeates the universe. The amulet is a powerful talisman that provides the wearer with protection from the evil forces of decay and degeneration.

The loop of the Ankh is held by the Gods. It is associated with Isis and Osiris in the Early Dynastic Period. The Loop of the Ankh also represent the feminine discipline or the (Womb), while the elongated section represent the masculine discipline or the (Penis). These two sacred units then come together and form life. Because of its powerful appeal, the Ankh was used in various religious and cultural rituals involving royalty. In the Treasures of Tutankhumun, the Ankh was a major artifact found in the tomb. The circle symbolizes eternal life and the cross below it represents the material plane. The Ankh is called the "Crux Ansata," it is of Egyptian origin and can be traced to the Early Dynastic Period, appearing frequently in artwork of various material and in relief, depicting the Gods.

It is usually held to the nose of the deceased king by the Gods to represent the breath of life given in the after-world. The Ankh also resembles a key and is considered the key to eternal life after death. Its influence was felt in every dynastic period and survives as an icon possessing mystical power throughout the Coptic Christian era. The Ankh possessed by each God had power associated with that God. The Ankh of the God Anubis is related to the protection of the dead, that of Sekmet, War, Hapi related to the living waters of the Nile and Amen, the spirit God, the breath of life.

Most of our items will be shipped out from California, USA in one or two business days.