Authors & Copyright: Larissa Soloviova & Marina Marder
Many Thanks to the Authors
The Russian Matryoshka (painted wooden dolls nestled into one another) is known far outside Russia and has a history of almost a century. During this comparatively short space of time it emerged as an all-embracing symbol of Russia, a symbol of Russian folk art.

There are at present several centers for the production and painting of matryoshkas. They include Sergiev Posad near Moscow, the city of Semyonov and the villages of Polkhovsky Maidan and Krutets in the Nizhni Novgorod Region. Other known centers are in the Vyatka, Tver, Mariel and Mordovian areas. The art of matryoshka painting has spread from Russia to the Ukraine and Byelorussia. The art of authors’ matryoshkas has seen vigorous development.


The wooden painted doll appeared in Russia in 1890s, the period that saw burgeoning economic and cultural development. It was the time of a growing sense of national identity and interest in Russian culture and art. As part of this general trend a new artistic current called "Russian style" emerged. The so-called Mamontov circle was among the early centers that advocated the revival of Russian culture. It was presided over by Savva Mamontov (1841-1918), a Russian industrialist, patron and connoisseur of arts who had gathered around him a group of outstanding Russian artists including I.E. Repin, M.M. Antokolsky, V.M. Vasnetsov, M.A. Vrubel and others. In his Abramtsevo estate near Moscow Savva Mamontov built art studios where folk craftsmen worked along with professional artists. The enthusiasts who formed the Mamontov circle engaged in education, art and collection with a heavy emphasis on reviving Russian culture, especially the national and folk traditions. Among the items of folk art they collected were peasant toys.


The development of the folk peasant toy was a major area of their efforts. To this end a Children’s Education workshop was opened in Moscow which began by making dolls to demonstrate the festive costumes of inhabitants of various gubernias and uyezds in Russia and were an accurate portrayal of ethnic features of peasant women’s dress. It was at this workshop that the idea of a Russian wooden doll was conceived. S.V. Malyutin (1859-1937) made sketches, a professional artist and member of the Mamontov circle, an active pioneer of the "Russian style" in art. His matryoshka was a round-faced peasant girl in an embroidered shirt, a surafait (a Russian national dress) and an apron, in a colored kerchief holding a black rooster.

The Russian wooden doll was called matryoshka. The name is not fortuitous. In provincial Russia before 1917 the name Matryona or Matryosha was among the most common female names derived from the Latin root "mater", which means "mother". The name conjured up the image of a staid, sturdy family matron. Subsequently, it became a symbolic name and was specifically applied to describe painted wooden dolls fashioned in such a way that they could be taken apart to reveal smaller dolls fitting into one another. Yet to this day matryoshka remains a symbol of motherhood and fertility. A doll with a numerous offspring of dolls is a fine metaphor for the oldest symbol of human culture.


The first Russian matryoshka manufactured from the sketches of S.V. Malyutin by V. Zvezdochkin, the best toy-maker of Sergiev Posad, contained eight dolls. A girl with a black rooster contained a boy, which contained a girl again. No two figures were alike with the smallest, eighth, figure portraying a baby tightly wrapped in a diaper. S.V. Malyutin borrowed the idea of a "take-apart" doll from a Japanese toy which S.I. Mamontov’s wife had brought from the Island of Honshu. That figure showed a sage by the name of Fukuruma, a good-natured bald-headed old man, a doll that contained several other figures nestled in one another. The Japanese, incidentally, claim that a Russian monk made such doll on the Island of Honshu the first.


Russian craftsmen who had a long tradition of making wooden objects that fitted into each other (for example, Easter eggs) mastered the matryoshka technology with ease. The basic technique of matryoshka-making remains unchanged and it draws on all the turning skills used by Russian folk craftsmen.


The most common kinds of tree used for matryoshkas are lime and birch. The trees that chosen are usually cuts in early spring. Stripped of their bark leaving a few rings to prevent the wood cracking when dried. The logs are arranged in piles with a clearance between them to allow aeration. The logs are kept in the open air for several years. It is essential not to allow the wood to be too dry or not dry enough. Only an experienced master can tell when the material is ready. The logs are then cut into workpieces for matryoshkas. Every work piece passes through as many as 15 turning operations before being fashioned into a doll. 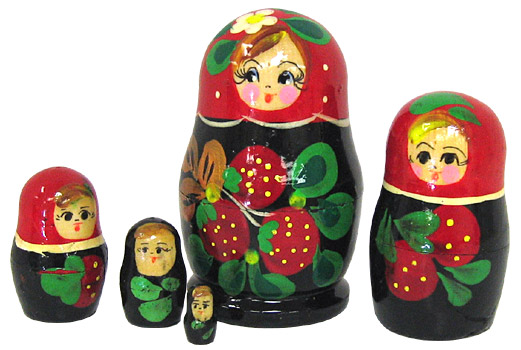 Fashioning a doll on a turning lathe requires a high degree of skill, an ability to handle a beguilingly small set of tools - a knife and chisels of various length and shape. The first to be made is usually the smallest figures which cannot be taken apart. In the making of the next matryoshka the bottom part is fashioned first. Then it is processed to a necessary height and the top end is removed. After that the upper ring is made on which the top part of the matryoshka will be fitted and then its lower part is made. Then the matryoshka’s head is fashioned and enough wood is removed from within the matryoshka’s head to slip on the upper ring. All these operations do not involve any measurements, and rely on intuition and require great skill.


The upper part of the matryoshka stuck on the lower part dries and tightens the ring so that it sits securely in place. The turning work done, the snow-white wooden doll is thoroughly cleaned, primed with starchy glue to make its surface ideally smooth and to prevent the paint making smudges and then dried. The matryoshka is now ready to be painted.


The pattern of the first Russian matryoshka was poked and it was painted with gouache and covered with varnish by S.V. Malyutin himself. Until the late 1890s matryoshkas were manufactured in the Children’s Education workshop in Moscow and after the workshop was closed the showcase and training works in Sergiev Posad near Moscow, an old toy-making center, picked up the tradition. It soon launched commercial production of the toy and developed the type of matryoshka that became known as Sergiev Posad or Zagorsk matryoshka. In 1930, the city was renamed Zagorsk but its old historic name has been recently restored.